Do you often scroll down news articles or social media posts to read (and relish) the comments below? It’s our common foible. Out of boredom or curiosity, at times we all like to imbibe the wisdom of the crowd.

Skimming through comments, however, is not a harmless pastime. Psychology has tons to say about online opinions and the ways these affect us.

Some claim you should never read the comments, and for good reasons.

Comment sections on websites and blogs are touted as the darkest places on the Internet. More and more news organizations are choosing to restrict or ban commenting because of the huge number of aggressive, insulting and vitriolic comments they receive. In 2014, a Pew Research Center study found that about one-in-five (22%) internet users that had been victims of online harassment reported that it had happened in the comment section of a website.

Indeed, people tend to become militant online. There are several reasons for that, sums up Scientific American. The leading one is users’ anonymity. When people are allowed to post without disclosing their identity (as in many forums and websites), their comments debase noticeably. Researcher Arthur Santana, for example, showed that anonymous comments on news sites can be classified as “uncivil“ around  53% of the time, compared to just 29% for not anonymous comments. 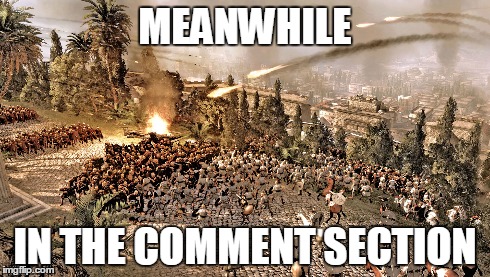 Anonymity causes the so called online desinhibition effect, a psychological phenomenon that occurs when accepted social norms cease to exist in online contexts (take a look at this great article by Maria Konnikova for a recap).

What’s more: psychologist Sherry Turkle says we are rude because we tend to dehumanize each other online. As we don’t see the immediate effect of our words on the other person, we don’t choose our language carefully. The lack of eye contact online has also been proven to stir up aggressive behaviors.

Another reason is that comments are lengthier than real speech and in writing people cannot be interrupted by others. That makes it easier for users to vent their anger online, points out psychology professor Art Markman.

Unlike websites and blogs, comments on social media platforms such as Facebook are more civil due to the fact that people use their real names. A content analysis of political discussions on The Washington Post website (which was mostly anonymous at the time) shows that comments on the website are significantly more uncivil than discussions of the same topics on their Facebook page.

Both the platform and the existence of opposite opinions determine how rude we can become. Comparing incivility across different platforms (YouTube, Facebook, blogs), researchers Rousiley Maia and Thaiane Rezende found the highest number of rude comments and personal insults on YouTube, an anonymous setting where people post widely contrasting opinions. 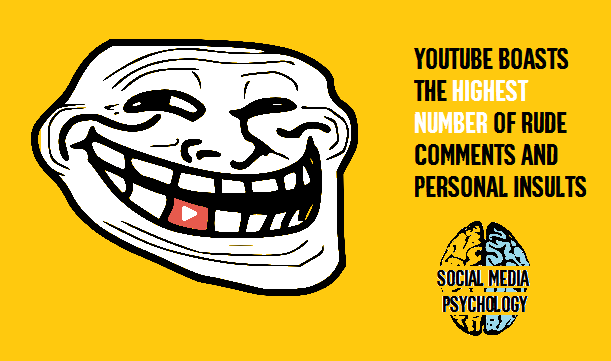 All this negativity ‘below the line’ affects the way we perceive the message above, research shows.

Uncivil user comments, especially on less familiar topics, influence how readers interpret the preceding information. A study by Ashley Anderson et al. analyzed people’s opinions on nanotechnology after reading an article together with fictitious comments. The participants exposed to offensive comments expressed more polarized opinions on the topic. The actual blog post objectively weighed up risks and benefits from nanotechnology, but the uncivil tone of the comments increased the readers’ risk perceptions.

Negative comments make articles less persuasive, shows a study by University of Duisburg-Essen. The researchers explored how journalistic articles from respectable news sites are perceived when posted as links on Facebook. The type of user comments and the number of likes that each post received were systematically varied. While negative comments were found to reduce the persuasive influence of the articles, positive comments had no strengthening effect. Moreover, the high number of likes received by some articles didn’t enhance their persuasive value for the readers, which indicates that comments are more impactful than mere quantitative support with one-click interactions.

It also turns out that exposure to online negativity makes our own thinking negative – reading uncivil comments can immediately increase readers’ own hostile cognitions.

To sum up, we are all subject to social influence online. Reading other people’s opinions can influence our perceptions, thinking and even behaviors. But are we that easy to be herded along?

Negative comments can discredit the information we read, but whether we will be influenced also depends on the topic and on our attitudes. In addition, influence works both ways – positive comments can mislead us as well.

Readers’ opinions on topics related to health and science are particularly easy to change. A study led by professor Holly Witteman from Laval University analyzed people’s reactions after reading a mock article on home birth followed by ten social media comments. The researchers modified the comments so that some participants only saw comments in favor of home birth, while others read negative ones. The results show that exposure to one-sided polarized comments – positive or negative – swayed opinions respectively pro or contra home birth. The participants’ prior knowledge on the topic played no role. It also turned out that comments telling a personal story were the most influential ones.

Similar are the findings on online discourse related to climate change. Users’ comments can influence whether a climate story is perceived as credible, especially if the commenters give ‘scientific proofs’ for their opposing opinions.

However, the stronger our prior attitudes are, the less likely comments will affect us. Researchers K. Shun and M. Lee from California State Polytechnic University investigated the impact of online comments on individuals’ attitudes toward a corporation. The participants with a strong negative attitude were less influenced by positive comments than those with a neutral attitude.

The less we know…

…the easier we are to influence. And this holds true not only for scientific topics.

A recent paper by the University of Delaware examines how social media comments influence voters’ opinions on politicians. To guarantee neutrality, the researches created a Facebook page of a fictitious candidate. Then they variedly left positive and negative comments on some posts of the page. As expected, positive comments affected favorably the participants’ opinions on the imaginary politician, while negative ones had the opposite effect.

Interestingly, the politician’s replies on the comments had no influence on how he was perceived.

The experiment perfectly illustrates how informational influence works: when we lack knowledge on a subject, we seek and trust other people’s opinions, regardless of their accuracy. This has surprisingly broad repercussions in the online world – from trusting unknown users’ opinions on political figures or choosing holiday destinations based on ratings, to regarding websites with ‘unprofessional’ design as unreliable.

What our friends say

How about social media comments by people we know? They can be very good for us, as long as they come from the right person.

Facebook researchers recently found that receiving comments on our posts is more important than getting likes. Comments from friends – even brief ones – are perceived as social support and increase our psychological well-being. To have beneficial effect, personalized comments must come from close ties, or people who are our friends in real life. Likes, in comparison, are easy-to-produce one-click communication that doesn’t enhance well-being.

Reading other people’s comments can even influence what kind of comments we publish ourselves.

In April 2016 The Guardian analyzed 70m user comments left on its site since 2006 and discovered that abusive comments tend to produce more abusive comments, and eventually lead to avalanches of online aggression. According to the findings, mobs form very quickly in the comment sections.

These are classic examples of emotional contagion online. Whether or not we realize it, other people’s emotions infect us and can have an influence on what we post. Many studies have been done on the subject, including the much disputed Facebook experiment, in which the company tweaked its newsfeed algorithm to show more positive or negative posts to certain users. The results demonstrate that the mere fact of seeing more ‘happy’ posts makes people create positive posts, and vice versa. Same principles apply to comments… provided that we belong to those people who actually write their opinions online!

Different studies shows that commenters   – especially regular ones – belong to a minority.

Most people don’t produce content on social networks, and that includes leaving comments. According to the 90-9-1 (and the more recent 70-20-10) rule for participation inequality, the majority of online users are ‘lurkers’ who just take in information and never actively participate with opinions. As per the revised 70-20-10 rule from 2011, around 10% of all users are heavy content producers who frequently comment, and around 20% comment occasionally.

More recent data suggests that user participation might still be on the rise, depending of course on the topics people decide to comment on  – in 2013, for example, Pew Research Center found that about three-in-ten (28%) Facebook users comment on posts about government and politics.

A survey done by the Engaging News Project points at even bigger figures for occasional commenters – according to the results, 55% of Americans have left an online comment at some point, and 77% of them have done it on social media. However, 53.2% of those who commented admitted that they did so once a month or even less frequently, which still makes frequent commenters a distinct minority.

Who are they, anyway?

The psychology of online commenters undoubtedly deserves a separate article. But to state the obvious: these are people, who are motivated to discuss a specific topic.

According to the Engaging News Project survey, users who like to leave online comments on news sites are predominantly male and have lower levels of education and income, compared to those who read news comments. 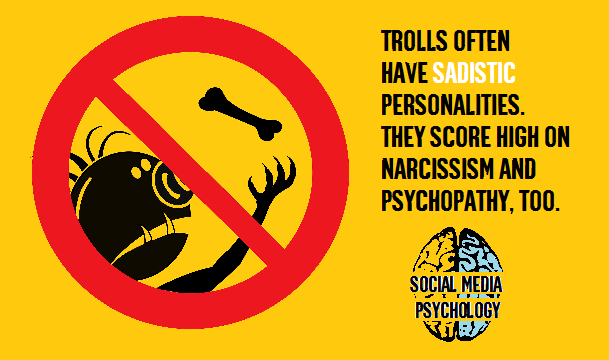 Trolls, or people who continuously post inflammatory or off-topic comments aimed to disrupt conversations, often tend to have sadistic personalities. Main characteristic of sadism is enjoying other people’s suffering, which is reflected in the way trolls communicate online. In fact, trolling can even be considered a socially acceptable way to satisfy sadistic needs. Narcissistic, psychopathic and Machiavellian traits can also be attributed to trolls.

You certainly have noticed it: both trolls and regular commenters struggle with grammar and spelling. This has its psychological reason – according to a study done at the University of Southern California the more often we post, the worse our comments become – stylistically and grammatically. After analyzing 40m comments on Reddit, the researchers found that users who spent more than an hour commenting tended to post shorter, less sophisticated comments that received fewer upvotes and responses.

So is it good that ‘normal people’ comment less frequently? There are many reasons why we prefer to keep our opinions to ourselves. A study by Pew Internet Research sheds light on one of them, which is very relevant for social media, namely, the tendency not to speak up when we think the audience will disagree with us. According to the spiral of silence theory, people won’t express their opinions for fear of isolation if they feel that the majority has a different opinion.

Even if most of us tend to comment sparingly, there are still plenty of comments to peruse on the Internet – for good or bad. According to Forbes (2015), every month, 2.5 billion comments are posted on Facebook business pages. Nearly half (45%) of social media users admit that they would be influenced by comments about a product on social media (PwC Total Retail Survey 2016). 43% say that an interaction with a brand on social media results in more respect for the brand. 90% of news websites have some form of a comment section.

Whether we like it or not, comments are omnipresent. Taking them with a grain of salt is readers’ responsibility.

*The author embraces your opinions on the article. Care to leave a comment below? 😉

The vector images used to create some of the visuals above are from Pixabay.com. Many thanks to all authors!